On the 31th of October 2018, my mother, a long-time Estonian National Opera and Ballet Theater’s prima ballerina, Larissa Kaur, will be 77 years old. Prima ballerina Larissa Kaur has been dancing for more than 20 years on the stage of the Estonian theater. Her roles include the Black and White Swan in “Swan Lake”, the main part in “Sleeping Beauty”, and many other great roles. It was a happy time for the Estonian ballet. That also meant personal close acquaintances with the world-famous ballet artists to my mother, such as Rudolf Nuriev in St. Petersburg. For ten years, Larissa Kaur also danced in Astoria and in the Viru variety theatre.
Larissa Kaur was one of the most beautiful women in Estonia in the 60's who, besides being a prima ballerina in Estonia, was also a photomodel of the largest and most popular fashion magazines in Estonia and Eastern Europe.

She also frequently posed on the cover of our local fashion magazine “Siluett”. She was a beauty, who inspired many great painters. For example, Olev Subbi. And the journalists of that time even called my mother as Elizabeth Taylor. She was an inspiration to Georg Ots, Eri Klas, Peeter Saul, Sulev Nõmmik and Eduard Tubin. It's not just the feeling that Estonias culture’s peak was 60s and 70s, where Larissa Kaur was participating. Prima ballerinas granddaughter, my daughter Viktoria (22), is incredibly similar to her grandmother. Larissa Kaur, a long-time Estonian National Opera’s prima ballerina, occasionally consults in the field of choreography. Last time she set up the classical choreography of our young figure skaters. Congratulations, mom!
Автор: Max Kaur на 12:21 Комментариев нет: 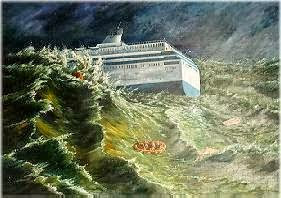 The circumstances of the tragic sinking of the MS Estonia on September 28, 1994, which claimed thousands of lives of Estonian, Finnish and Swedish nationals, can no longer remain a secret in the realities of modern Europe. It’s been over 20 years, long enough to finally uncover the truth about the horrific tragedy that had struck the peaceful Baltic Sea.
A wide variety of versions and assumptions of how the events unfolded still cause controversy to this day. The results of the official investigation by the special state committee did not provide any answers; on the contrary, new facts were uncovered, refuting previous versions of these tragic events. Today, the need to create a new independent international investigation committee is clear. The investigation should, of course, involve representatives and relatives of the deceased.
The time has come when years after, scandals are exposed concerning business, politics and public life. In light of the secrets associated with the disaster, it’s time for the politicians and officials who were in charge at the time in Estonia, Sweden, Finland, EU and NATO, to start talking about it. I am sure that these people have all the information regarding the tragedy.
At the 2010 conference regarding the disaster, several curious facts came to light. In particular, on the night of September 28, 1994, the very night the MS Estonia was on its way from Tallinn to Stockholm, unplanned large-scale NATO exercises were conducted in the Baltic Sea. It should be noted, that unplanned live fire exercises could be performed as well.
In any case, the question remains as to why the NATO troops, who were practicing the salvation of the civilian ships, never came to the aid of the ferry in distress? Why did the leaders of our country keep silent about it? Today it is evident that what we are dealing with was not an accident but a crime. The answers we still need are to who orchestrated the tragedy, who led the operation, and who will be held accountable before the families of the victims and the European public. Unfortunately, I too have ties to this tragedy: I’ve lost my sister who was a crew member on the MS Estonia, as well as my grandmother who was a passenger.
Автор: Max Kaur на 11:27 Комментариев нет:

(FOTO) In the city of Jõhvi, the first round table of Christian confessions 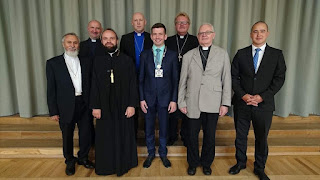 September 19, 2018 in the city of Jõhvi was the first round table of Christian faiths with the leadership of the town headed by the mayor Martin Repinsky. The meeting was held in a positive atmosphere. The plan for cooperation and further action has been drawn up.
Автор: Max Kaur на 11:42 Комментариев нет:

It's time to go to the North-Eastern Estonia! 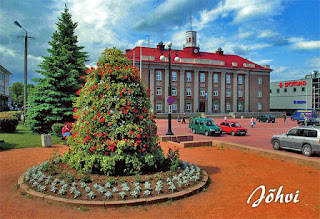 On 26 June 2018, a rural municipality assembly in Jõhvi, a capital town of the North-Eastern Estonia, elected Martin Repinski, the Member of the Estonian Parliament, as new rural municipality elder and approved the composition of a new rural municipality government, where I, as its deputy head, was entrusted with the responsibility for addressing development and entrepreneurship. The new government coalition, which includes the Centrists, the Reform Party and the Jõhvi Our Home, has decided to jointly work hard on changing things in the self-government to leap forward in the development of Jõhvi.
Jõhvi, being the capital of the North-Eastern Estonia and the regional center, needs sustainable development. Jõhvi has always been known for its cultural identity and traditions, which need to be preserved and expanded. The new team will have to ensure a positive image and intensive development of the self-government.
The key focus is to attract new resources to Jõhvi's development through state programs, EU structural funds and private entrepreneurs' investments. More attention should be given to social issues, including more support to retirees, young families, youth and sports. We plan to improve the town park, upgrade the football stadium, build a track and field stadium and install new playgrounds. We intend, through the support to entrepreneurship, to help in creating new jobs. Together with Eesti Rautee, we will fix the railway station and its surroundings. Jõhvi has always been a town, and in this regard, I sincerely support the opinion of the most town residents to reinstate Jõhvi's status as urban municipality.
Автор: Max Kaur на 15:17 Комментариев нет:

In England, there are new speculations about whether Prince Charles, when he becomes King, will appoint his wife Camilla, Duchess of Cornwall, to be Queen after all. When Charles married Camilla, the royal family decided, to her big dismay, that she would not to officially be known as Princess of Wales, because of the popularity of Princess Diana, who at the time of her death was wearing the title. For a long time, it has been thought that Camilla will be princess consort, like her father-in-law, Prince Philip is prince consort of Queen Elizabeth II.
This is a serious matter, for example Henrik, the Danish prince consort who recently passed away always wanted his wife to make him king consort. There was a historical precedent, when lord Darnley became king consort of Scotland when he married Mary, Queen of Scots, also known as Mary Stuart. Also Fredrik I who was prince consort, became King of Sweden. The situation for Camilla is much simpler, and actually, it’s quite scandalous that the official wife of King cannot become Queen. The position of first ladies is always complicated. President Ilves had two first ladies during his term of office. Beržinš, President of Latvia, got his first lady immediately after receiving the presidential office and divorced as soon as his term was over. Putin has no first lady at all. Only Trump shows his wife off, but alas, she's not American, but pure Slovenian, with a strong Slavic accent ...
Автор: Max Kaur на 03:13 Комментариев нет: 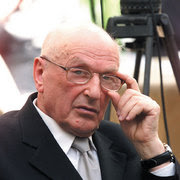 Estonian academician Mikhail Bronstein will be celebrating his 95th jubilee on the 23rd of January. Academician Bronstein is one of the intellectuals from Leningrad, who arrived in Estonia as a member of the teaching staff and made his career in Estonian, which probably had  not been possible in the conservative centres of the Soviet period. His contribution into the development of our elite has been priceless. Due to that it is logical that Bronstein also contributed to the process of the re-establishment of Estonian independence by supporting his previous students.
Bronstein is an expert of economy, who reached a high position by becoming Gorbachev’s councillor. He is the creator of the idea of agricultural-industrial complexes used by Mikhail Gorbachev, the member of the political bureau and the agricultural secretary of the Central Committee, when he reached the top hierarchy of the Kremlin. Undoubtedly, this activity supported Gorbachev in his movement to the position of the leader of the second super power in the world and changed the course of the world history and guaranteed Gorbachev the Noble prize.
As father, the academician is definitely proud of his son Aleksander, who studied in Tartu University and has worked as a senior manager in the Ministry of Environment Protection and has currently also managed to establish himself as a successful businessman. Multi-millionaire Aleksander Bronstein has become one of the leading entrepreneurs in aluminium business. Aleksander has been the most generous financers of the re-established Synagogue in Tallinn. Academician Bronstein’s grandson Dan Bronstein follows his grandfather and father’s footsteps.
Academician Bronstein surprises with his vitality. He managed to be the teacher to President Lennart Meri, Prime Minister Andrus Ansip and many others in the direct meaning of the word. Bronstein is also the honorary supervisor of my Doctor’s thesis, which I defended in St. Petersburg. Mikhail Bronstein has not said his last word yet, happy birthday to the grand old man of Estonian Science!
Автор: Max Kaur на 00:19 Комментариев нет: