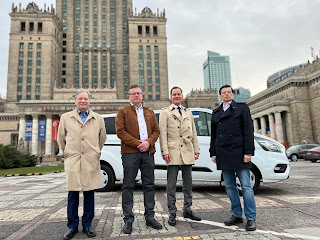 A delegation of Estonian politicians, public figures and journalists headed by the leader of the Electoral Union “Voice of Maardu” and a deputy of the Maardu City Assembly Nikolay Degtyarenko paid a humanitarian visit to Warsaw.

The Estonian delegation met with Warsaw City Council members and committee chairpersons Mariusz Frankowski and Aleksandra Snegotskaya-Gozdik at the Palace of Culture and Science in the capital of Poland, which is facing the largest number of refugees in Europe since World War II. During the meeting, they discussed the Polish experience of accepting refugees and the possibility of its application in Estonian self-governments.

A delegation from Estonia delivered to Poland three hundred packs of various iPharma vitamins (www.ipharma.ee), provided free of charge by Repforce OU, and other necessary assistance. The humanitarian visit to Warsaw was made possible thanks to the joint work of the electoral union "Voice of Maardu" and the faction of the Tallinn City Assembly of the "Estonia 200" party, as well as the personal financial contribution of the head of the humanitarian delegation, Nikolai Degtyarenko.

The Estonian delegation visited various centers for refugees in the capital of Poland, including the National Stadium, met with refugees and volunteers.